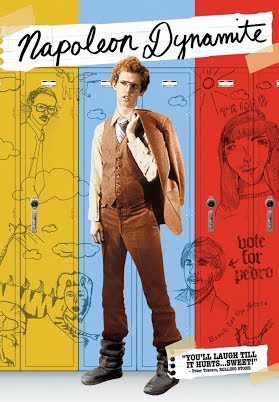 I love this movie. Mainly because of its mind-numbing nature and simple, funny writing.

Plus, the movie makers were genius. I’m not sure if directors knew this movie would be such a success but it obviously was. The filmmakers spent approximately $400,000 to make the film. And in the USA alone, within a year of its release, the movie brought in almost $45,000,000. Jon Heder, the main actor, was only paid $1000 to do the film. Talk about a huge profit margin.

The filmmakers thrived on a stupid, funny lines and a story about nothing in the middle of nowhere. But, obviously, people liked it.

But there are some life lessons we can learn from this movie, like:

Napoleon Dynamite is a simple movie. We have a lot going on in life. We need to take a step back and learn to simplify things. This may mean to unload some of the things on our plate, say no sometimes, and delegate.

2.  Glory days are over Uncle Rico

Uncle Rico lived in the past and regret. Well, news flash, we can’t go back. Our pasts are filled with good days and bad, good decisions and some bad ones. What can we do? Learn what we can, apply now what we ought, and change the future for the better. In the words of Pumba from The Lion King, “Leave your behind in the past.” There is a lot of truth in that. But, here’s a thought: how about not thinking of our past as our glory days. Make today our glory day!

3. “Are you drinking 2% because you think you’re fat? You can drink whole milk if you want.” -Napoleon says to one of his friends.

Well, what can we learn from this? One is the simple truth Napoleon, I’m sure unknowingly, identifies is why do we do the things we do? Why do we drink 2% or skim? Why do we buy and consume sugar free, fat free, or diet drinks? Is it because of a deep-rooted discontentment for who we perceive we are? Napoleon first reminds us that we are more than our body. Second, who we are is often very different than who we perceive ourselves to be. Third, whole milk isn’t bad for us.

There is nothing wrong with asking for help when you need it but be careful not to abuse it.

5. “It took me like 3 hours to finish the shading on your upper lip” -Napoleon says to Summer after giving her a picture he drew.

The lesson here is to pay attention to details. Give your best effort in every detail so you can live without regret. But, don’t be creepy.

6. Pedro didn’t go to school one day because he didn’t feel well; so, he cut his hair.

Pedro didn’t wallow in self-pity because he felt bad, rather he searched out the problem and fixed it. He was overheating so he cut off his hair.

7. Rex-Kwando. “Do you think anyone wants a roundhouse kick to the face while I’m wearing these bad boys (his American flag pants)? Forget about it!”

Find a way to be confident and don’t neglect to train legs.

9. “Make yourself a dang k-sa-dilla!”-Napoleon’s grandma.

10. “Your mom goes to college.”-Kip says in the background.